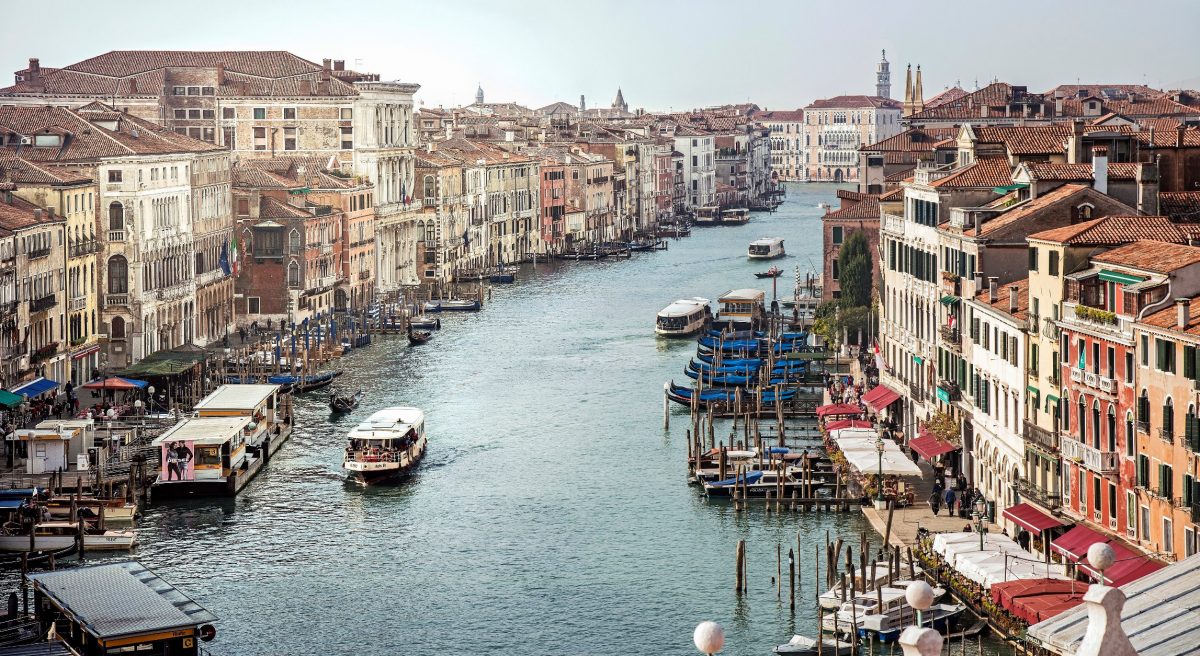 Italy: From Abruzzo’s Wine Country to the Magic of Venice

An invitation from the Masciarelli winery to stay at their Castello di Semivicoli in Abruzzo and tour their winery was the perfect reason to visit this lesser-known region of Italy, with a side trip to Venice to see the Biennale art fair.

Situated on the Adriatic Coast 50 miles east of Rome, Abruzzo is home to many of the country’s best-preserved medieval and Renaissance hill towns. The scenery is enchanting and resembles that in the movie series “Lord of the Rings” with its wild landscapes, narrow valleys, hillside roads, and hundreds of fortified castles and monasteries.

During our two days there we marvelled at the breathtaking vistas, castles, small towns, and endless acres of vineyards, olive groves, and farmer’s fields.

The rugged region of Abruzzo is bordered by the Adriatic Sea to the east and the Apennine Mountains to the west, which actually creates a perfect climate and soil for grapes such as the world-renowned Montepulciano d’Abruzzo.

After we checked into the baronial suite at the Castello, a wonderful lunch with Valentina, the hotel manager, awaited us in the dining room, followed by a cooking lesson on how to make a fig-stuffed pastry typical of the region. We devoured some outside afterwards in the glorious garden.

Later, a delicious dinner accompanied by wines selected from different Masciarelli domains such as Villa Gemma and Marina Cvetic was served in the quaint dining room. A fire was burning in the massive fireplace and the windows offered spectacular views of the mountains.

The next morning, after a tour of the Masciarelli vineyards and production facility (this being October the grape harvest was winding down), there was a delightful gastronomic lunch hosted by the Villa Maiella restaurant in the town of Guardiagrele at the foothills of the Gran Sasso mountain range. We sampled wild boar, a specialty of the region at this time of year.

The next day we drove to Pescara to catch the train to Venice, where we planned to experience the Biennale art fair and do what every tourist does in Venice—get lost amid the maze of alleys and footpaths.

There is nothing more magical than arriving in Venice by private boat, which we did thanks to Matteo Bisol, host of Venissa, where we spent our first night on the tiny island of Isola di Mazzorbo.

Not to sound cliché, but Venissa is one of Venice’s most unique hotel estates. It calls itself a “wine resort” and as well as an award-winning gourmet restaurant it has its own vineyard from which an even more unique white wine the colour of nectar is produced from their golden grapes. The wine is sold in specially blown bottles of Venetian glass decorated with a gold leaf label, with each bottle numbered.

After an extensive tour of Venissa’s grounds and buildings, we were famished and ready for the tasting menu accompanied by local wines. It was an exquisite experience from start to finish.

Venice is so well organized with its waterway “buses” and taxis that you can easily travel between islands by boat with a day pass or a three-day pass purchased from the tourist office or a newsstand. We had a blast getting around the islands using the water bus system and getting a feel for how Venetians have lived, undeterred, for centuries.

So we could be in a more residential area, we spent our second night a studio flat in a chic art-and-design neighbourhood named San Marco.

We hired a licensed guide through Astartesc who brought us into undiscovered, hidden neighbourhoods free of tourists (yes, there are some!). The tour started from the Rialto Bridge, past the bustling daily fish/meat/produce market, to a discovery of little courtyards and majestic palaces, some open to visitors, overlooking the smaller canals. We then gathered our strength and shuttled by water bus across to the Guidecca to have a delicious dinner of seafood risotto, a Venetian specialty, at Bacaromi restaurant at the Hilton Molino Stucky Venice, with the city lights twinkling across the canal.

The next morning we tackled the immense Biennale art fair, which exhibits every other year in the Arsenale, a sprawling complex of former shipyards and armouries. The focus of the Biennale is contemporary visual art. After visiting the Arsenale, visitors take a short walk to see the rest of the contemporary art exhibits, organized by country, which are spread out in specially built pavilions in the nearby Venice Giardini. Some of the pavilions date from the early 1900’s.

Using the excuse to take another water boat, we went to Murano, an island that has been devoted to glass-making for the past 600 years. We were searching out Venini, which produces some of the most art-inspired art glass pieces in collaboration with world-class artists and designers. The boutique itself represents a sleek esthetic design with each piece showcased as if it’s a work of art. We enjoyed being one of the first to see Japanese architect Tado Ando’s new vase series which was being set up while we were there.

Back on the main island in time for dinner, we had quite a time finding Ai Mercanti, a stylish restaurant located within a courtyard serving contemporary Venetian food described as “bistronomie.”

The next day we had to say goodbye to Venice’s magic and the new friends we made here and in Abruzzo. But knowing that there are many more discoveries to be explored in the Veneto and Abruzzo regions, we will be back!

Isabelle Kellogg is a writer and public relations consultant in the luxury sector, with a passion for diamonds, jewelry, watches, and other luxury products, including travel.