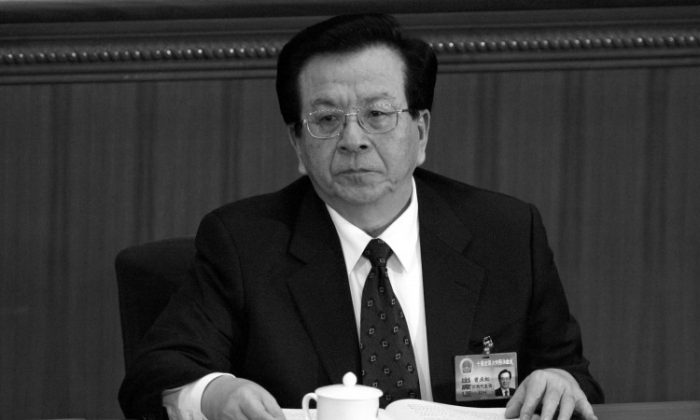 The Secrets of Zeng Qinghong: Part I

Zeng Qinghong, a formerly powerful apparatchik in the Chinese Communist Party, has been a longtime enabler and ally of former regime leader Jiang Zemin and ousted Party official Bo Xilai. And his father’s political history is likewise inglorious: as a collaborator with the Japanese during the Chinese civil war.

The story of the two men also reveals how recondite historical details can be used to discredit political opponents, and how the subtle game of power politics in communist China plays out.

Getting to Know Zeng Qinghong

China’s former vice president, 72-year-old Zeng Qinghong, kept himself busy after losing his post prior to the Communist Party’s 17th National Congress in 2007.

After Jiang Zemin and his clique lost power within the Chinese Communist Party (CCP), Zeng decided to act as the think tank for Jiang’s “bloody-hands” faction, working to ensure that he and Jiang’s faction would not have to pay for their crimes.

Political rumors indicated that Jiang had once tried to replace Hu with Zeng Qinghong, but the CCP top circle blocked it.

According to a high level source in Beijing, Bo Xilai was Jiang’s choice for successor. When Bo failed to become a standing member of the Politburo at the CCP’s 17th National Congress in 2007, it signaled that Bo would not become the CCP’s general secretary at the 18th Congress. Zeng then suggested to Jiang that they should stop Li Keqiang, the vice premier and Hu’s protégé, from becoming the CCP leader at the 18th Congress. Zeng told Jiang to find someone to occupy the seat of the CCP general secretary before Bo could obtain the seat. Zeng recommended Xi Jinping, a man he thought was not politically ambitious.

Xi then replaced Li, while Jiang and Zeng were secretly fostering Bo Xilai. Xi was unaware of Jiang’s true motives until Xi traveled to the United States in February. Sources say that U.S. intelligence told him about Jiang’s plan to put “Bo after Xi.”

Zeng’s father, Zeng Shan, joined the CCP in 1926. Zeng Shan was the chief of the New Fourth Army, working in east China after the Sino-Japanese War started. He represented the CCP many times, signing secret treaties with the Japanese.

After the Cultural Revolution started, Mao Zedong purged tens of thousands of veteran CCP members. Zeng Shan managed to escape the purge because of his work with the Japanese.

Political commentator Jin Jiangpin has suggested that an article, published in a state-run magazine in 2007 ahead of the 17th National Congress, was the start of Zeng Qinghong’s fall from power.

“I guess Hu took this magazine, and threw it at Zeng Qinghong’s feet, saying, ‘tomorrow’s People’s Daily will carry this article. What are you going to do?’ And Zeng Qinghong immediately resigned. So we see just around the 17th National Congress Zeng announced his resignation,” stated Jin Jianping in a blog post. People’s Daily is the mouthpiece of the Party.

The magazine, “Secret Records of the Past,” regularly promotes CCP members’ achievements. The article discussed Zeng Shan’s background. It said that back in 1967, Red Guards and insurrectionists believed that Zeng Shan was a traitor who worked with the Japanese. Attempts were made to publicly humiliate and persecute him, but ultimately Zeng Shan was protected from harm.

The article went on to say that an office manager at the Ministry of Public Security wrote to the Director of the CCP Central Office, Wang Dongxing, and the Minister of Public Security, Xie Fuzhia, asking them to investigate the accusations against Zeng Shan. The office manager and four other staff were allowed to enter the Secret Files Hall with an approval document signed by Wang and Xie.

After several days of searching, the five men found telegraphs proving that the CCP Central Committee had indeed ordered Zeng Shan to sign secret treaties with the Japanese. Among the evidence were several telegraphs containing the specifics of the treaties. The telegraphs were signed by Mao Zedong, Zhou Enlai, Liu Shaoqi, Ren Bishi, and Kang Sheng.

According to the report, the five men were not allowed to remove the documents from the Secret Files Hall, so they copied down the information verifying Zeng Shan’s claims and reported it to their superiors.

Kang Sheng, Mao’s right hand man and the Party’s spymaster and security chief, quickly twisted the five men’s discovery into an “anti-revolutionary” act and had Wang and Xie punish the five men. The office manager was sentenced to eight years in prison, and was not released until after Mao Zedong died.

The best-selling book “China’s Princelings,” by He Pin and Gao Xin, published in 1992, exposed the backgrounds of around 40 sons and daughters of high-level Party officials. It adds detail to this controversy. According to the book, Zhou Enlai gave specific instructions to CCP insiders on Sept. 27, 1967, that Zeng Shan’s activities were based on orders from the CCP Central Committee. He forbade revolutionary groups from interfering.

Amid that politically-fraught environment, Mao was plotting to kill a number of CCP veterans, including Liu Shaoqi, Peng Zhen, and He Long. However, Mao treated Zeng Shan well, and personally appointed him to continue his post as a member of the Central Committee during the CCP’s 9th Congress.

Zeng Shan died of a heart attack in 1972. That same year, the CCP waived US$600 billion of Japan’s war reparations to China. Jin Jianping said the CCP did not dare to claim the reparation because Japan knew too many of the CCP’s secrets.

Unlike most of China’s citizens, Zeng Shan had it relatively easy during the Cultural Revolution. His son, the now elderly Zeng Qinghong, did not have a hard time either.

The Epoch Times publishes in 35 countries and in 19 languages. Subscribe to our e-newsletter.

Click www.ept.ms/ccp-crisis to read about the most recent developments in the ongoing crisis within the Chinese communist regime. In this special topic, we provide readers with the necessary context to understand the situation. Get the RSS feed. Get the new interactiveÂ Timeline of Events. Who are the Major Players?

Fauci and Collins Silence Scientists: ‘There Needs to Be a Quick and Devastating Published Takedown’ | Truth Over News
sharecomments